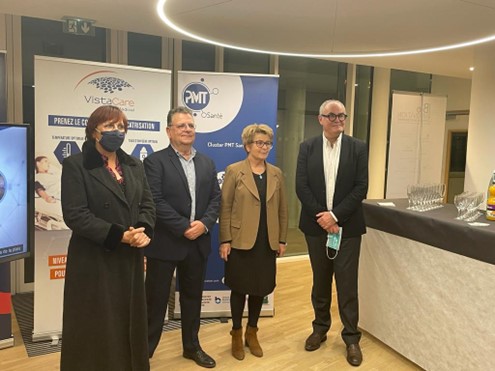 VistaCare Medical inaugurated on November 30 its new premises in the “Bio Innovation” building, located next to the CHRU Jean-Minjoz in Besançon. The inauguration took place in the presence of Anne Vignot, President of Grand Besançon Metropole and Marie-Guite Dufay, President of the Burgundy Franche Comté Region.

Inaugurated in March 2021, the Besançon Bio Innovation Cluster is intended to be a physical interface for meetings between public and private players, whether they be doctors, researchers or engineers. The main idea is to bring together the scientific, academic and economic communities around innovation in health.

“Our development has benefited from the entire regional ecosystem. Thus, our production is 100% French. We at DTAMedical are proud to be part of these industrial startups that develop in the territories and assume their role as a local economic player, particularly by creating jobs,” said François Dufaÿ, president and founder of VistaCare Medical.

Together with its suppliers, VistaCare expects to create nearly 60 jobs in the Besançon area in the coming years.

Linkedin
previous
Les Echos Régions - The deployment of VistaCare technology in France
next
L'EST Républicain - Healing of complex wounds without dressing: "DTAMedical allowed me to regain the use of my leg"

The site is reserved for healthcare professionals.

Are you a healthcare professional ?